For fast free immediate shipping, you can purchase our masks directly from our Amazon store using the links at the bottom.  Depending on your location, you can receive our masks with free Prime same day or next day delivery.

For special orders, including special requests or bulk order, please email us directly at:  sales@cuvu.ca 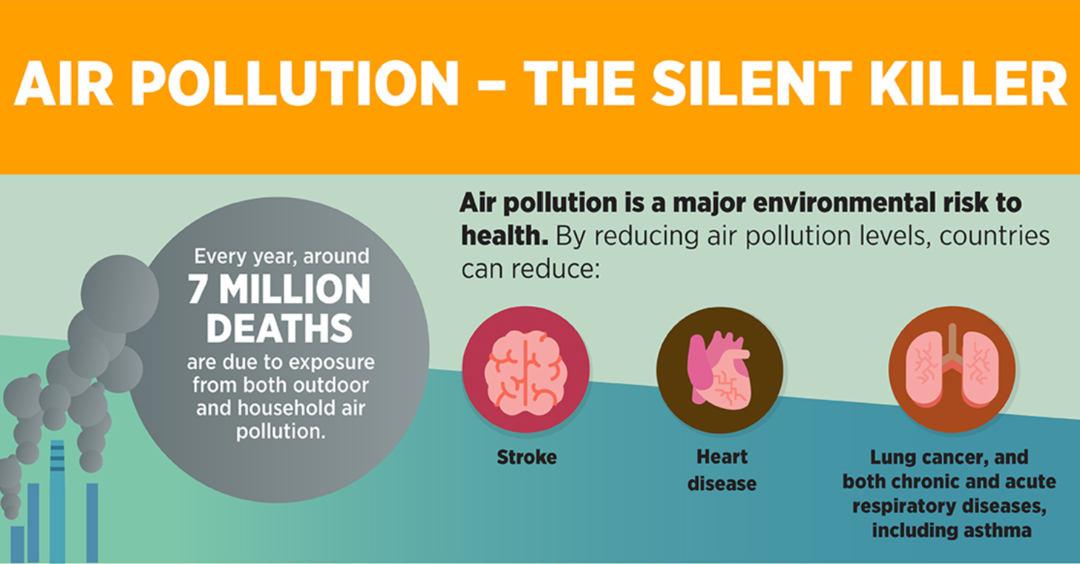 According to the World Health Organization (WHO) estimates, air pollution is a major health problem worldwide and responsible for 7 million premature deaths each year. Air pollution is recognized as a critical risk factor for stroke, heart disease, pneumonia, lung cancer, as well as acute and chronic respiratory diseases such as asthma and chronic obstructive pulmonary disease (COPD).

Stroke or ischemic heart disease occur when blood flow to the brain or cardiac muscle is either interrupted or insufficient. Air pollution is a known trigger, where ultrafine particles such as smoke, combustion particles, bacteria and viruses can reach the lungs, pass through the pulmonary membranes and enter the bloodstream along with other gases. The WHO estimates that 54% of air pollution-related deaths are from ischemic heart disease and stroke.

Ambient air pollution poses a higher risk of acquiring pneumonia, especially in children. In the case of pneumonia, the cells are filled with pus and liquid, making breathing painful and limiting the absorption of oxygen. According to the WHO, 21% of premature deaths associated with air pollution result from pneumonia.

Air pollutants can weaken the bronchi, making them more vulnerable to viruses and bacteria. It is the latter that promotes acute or chronic bronchitis, which can degenerate into chronic obstructive pulmonary disease (COPD). COPD is characterized by progressive narrowing and permanent obstruction of the airways and lungs. This is one of the possible causes of sudden death in adults. Those who suffer from asthma, can have their asthma exasperated by air pollution triggers such as dust, smoke and pollen. The WHO estimates that about 19% of premature deaths related to air pollution result from these factors.

The 2013 International Center for Research on Cancer (IARC) assessment found that air pollution was carcinogenic, particulate matter being the pollutant most closely associated with an increased incidence of cancer - especially lung cancer. A link has also been established between air pollution and the increase in the number of urinary tract / bladder cancers. The WHO estimates about 7% of air pollution related deaths are from respiratory cancers.

For every premature death due to air pollutants, there are also a magnitude of other non-lethal issues that can cause havoc on an otherwise healthy population.

In addition, the fine particles inhaled irritate the respiratory and ocular mucosa, making the airways more receptive and facilitating the accessibility of pollen in the body. The sensitivity of individuals to pollen is thus increased during pollution peaks. That's why even in cities where there is little greenery, the city population is sensitive to allergies.

Pollutants are known to impair fertility, cause premature births or intrauterine mortality. The risk of giving birth to a child of small weight is also increased. Hypertrophy has detrimental effects, causing some children to experience significant retardation of intellectual development.

Exposure to high levels of pollutants can result in itching eyes, nose, throat irritation, headaches, nausea and cough. In the long run, the effects are likely more severe.


Who is most impacted by air pollution?

Infants and young children are very vulnerable to air pollution because of their respiratory and immune systems that are still under development.

The elderly are particularly sensitive to air pollution because of the decrease in their local antioxidant capacity and the adaptability of their defense system. According to studies, the number of senior admissions in emergency services increases significantly during pollution peaks.

Asthmatics - According to the WHO, the development of asthma is linked to the association of genetic predisposition and exposure to particles in the environment. Researchers from the National Institute of the Industrial Environment and Risks (INERIS) note an increase in hospital admissions for asthma attacks during strong peaks of pollution, regardless of climatic conditions. They also emphasize the role of particles in the deep penetration of allergens.

Heart patients - A study in Brescia3 in northern Italy found a 3% increase in hospital admissions for an increase in PM10 concentration of 10 µg / m3 per day. Particles tend to clog the arteries and promote the risk of atherosclerosis.

How can CUVU Anti-Pollution masks help?

The 3M filtering material and technology used in making CUVU anti-pollution masks make it ideal for filtering not only common air pollutants, but also ultra-fine particulate matter PM0.3, including particles as small as bacteria and some viruses.